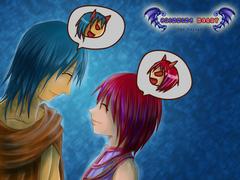 The story begins with a dragon who lost in a cursed woods over hundred years. He wants to get out from there and come back to his tribe so badly. And Suddenly, a traveler with unexpected circumstance, come to his life. The traveler true self was a famous handsome-man hunter, person who go around the world to take handsome-man's photographs. And she was also lost in there. The traveler was trying to get his picture, and the dragon was trying to eat her, while both of them hiding their true identity for each other...